Bromine In Foods: A Contributor To Iodine Deficiency 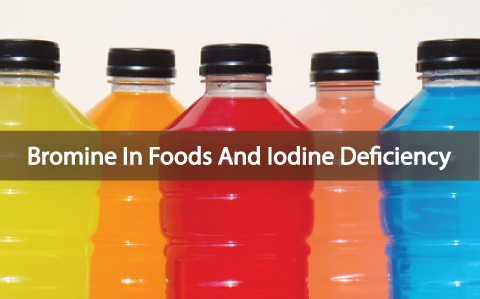 Info On Bromine And How To Avoid This Endocrine Disruptor.

Iodine, a naturally occurring element in every tissue and organ in your body, supports your thyroid function. Low levels of iodine are linked to a number of debilitating diseases, and it is estimated that up to 40 percent of the world’s population is deficient in this nutrient.

One significant factor that is contributing to the growing rates of iodine deficiency is bromine exposure. Bromines are common endocrine disruptors. Also classified as a halide, bromine competes for the receptors in the thyroid that capture iodine. In other words, bromine displaces iodine and puts you at risk for a number of health problems. This problem is called the “Bromide Dominance Theory.”

Bromine can be found in a number of objects around you, including the plastics used to produce computers, fire retardants in fabrics, carpets, and upholstery, and swimming pool treatments. Common sources of bromine also include certain foods and beverages.

Bromine-Containing Foods You Should Avoid

While some countries have already placed a ban on bromines, varieties of this chemical can still make their way to your food by means of ingredients or pesticides:

When ingested, bromine can accumulate in your central nervous system and trigger a number of psychological and psychotic symptoms, like acute paranoia. Bromine can also affect your:

There are steps you can take to fight bromine exposure. It is very important to pay attention to what you put in your mouth. You should consume organic foods as often as possible. Organic vegetables and grass-fed meats are raised using chemical-free practices.

Before you eat any produce, make sure you wash them thoroughly, so you can help prevent pesticide exposure. Avoid sodas and sweetened beverages, and drink only pure drinking water.

Use only organic whole-grain breads and flour. If you can, grind your own grain. Be sure to check the labels of commercial baking goods for “no bromine” or “bromine-free” labels.

The best way to raise your iodine levels is by consuming sea vegetables and spirulina. A form of algae, spirulina boasts of high concentrations of iodine. But make sure that the spirulina you take is harvested from uncontaminated waters. Other ideal sources of iodine include raw milk and organic eggs.

Adrienne R., a writer for Mercola, is currently researching the uses of chlorella and spirulina, and mosquito repellent. She is an avid reader of health articles and subscribes to numerous print and online health publications.

This article is offered under Creative Commons license. It’s okay to republish it anywhere as long as attribution bio is included and all links remain intact.

Questions or anything to add about bromine? We want your thoughts, please. You might just help someone else in need.