Follow us
Adrenal Fatigue, Good for You, Treatment, Wellness

Recently, I’ve been reading a book that has rocked my world. Maybe it will rock yours, too. Don’t be put off by the title. It sounds a little woo, if you know what I mean.

The title is Earthing: The Most Important Health Discovery Ever? I mean, come on. Earthing? What does that word mean, anyway? It sounds all hippie and earth-loving, but when I looked it up in the dictionary, it has more to do with how to cover up roots when you garden, than it does with health. And “the most important health discovery ever”? How about some humility?

Only after I read the book’s introduction, did I finally put two and two together and realize what the author was talking about: grounding. As in electricity. Now there’s a concept I can wrap my head around.

Here’s the basic premise. For most of human history, we have spent our lives connected to the earth. Not in an intangible woo woo way, but in real life physical proximity. We walked and played barefoot, or we wore shoes with naturally conductive soles like leather — which is as conductive as skin when it gets sweaty from our feet or damp from grass and earth. We gardened for our sustenance, routinely kneeling or handling the earth with our bare hands. We even lived on packed dirt or earthen tile floors. Electro-magnetically speaking, we were “grounded.”

Our bodies carry a naturally positive charge. The earth carries a naturally negative charge. When you put our bodies in contact with the earth, what do you get? The transfer of electricity from positive to negative until a state of neutrality is reached — we are grounded.

Of course, these days, we are hardly, if ever grounded. We wear shoes with rubber soles that don’t conduct electricity. We live in houses that are only grounded in electrical outlets. We drive in insulated cars. We sleep in beds far removed from the earth. Gardening is a hobby few of us take up. Walking barefoot on the earth a luxury even less of us enjoy. We do everything in an un-grounded state. In short, we are rarely, if ever grounded anymore.

Clinton Ober is a retired electrical engineer. One day he got a bee up his bonnet and decided to test himself to see what his natural electrical charge was. He whipped out his gadgetry and discovered his slightly positive charge. Then he started walking around his house. As he approached devices that emitted electromagnetic fields, his charge went up. The place in his house that had the highest charge wasn’t in front of his computer, but in his bed! He figured it was maybe because his headboard was near a wall with most of the houses’ electronic wiring running through it.

So, he did what any zany, scientifically-minded individual would do. He went to the hardware store and bought conductive tape. He used the tape to create a grid across his sheets, then ran a wire from the tape to the ground outside his window. Yep. He grounded his bed.

He laid down on it, and (wonder of wonders) fell instantly asleep. He awoke the next morning feeling refreshed and a bit amazed. You see, Clinton Ober suffered from insomnia. It usually took him hours to fall asleep, and he usually woke up exhausted. The next night, he slept grounded again with the same results. The night after that proved the same. On the third morning, he awoke to a miracle: no arthritis pain! Could the pain have gone away from the grounding?

He wanted to know. So, he started grounding all his friends’ sheets. They all reported back: better sleep, reduced pain.

While Clinton knew about electricity, he didn’t know much about human anatomy or physiology, so he had no idea why grounding himself while he slept, could have been so effective. That’s when he started meeting with researchers to see if any of these doctors had any theories about it.

Turns out that the inflammation that causes pain is, on a fundamental level, an accumulation of positively charged “free-radicals”. The theory is that by grounding himself, Clinton gave these positively charged ions someplace to go — to the earth. Once they were gone, so was the pain!

Clinton gave this process of grounding oneself to the earth a name — “earthing”.

One of the researchers that Clinton hooked up with was an endocrinologist. Clinton wanted physical proof that earthing was helping him and his friends sleep better. The endocrinologist said he ought to be able to do that by measuring cortisol levels.

Cortisol is a hormone that your adrenal glands release. Ideally, it should be high in the morning so that you can wake up feeling refreshed and energetic, even though you’ve been fasting and having low blood sugar all night long. It should taper off throughout the day and only rise and fall just before and after meals, in conjunction with your mildly fluctuating blood sugar levels.

Yet for many of us, that’s not what happens. Instead, we suffer from cortisol imbalances that can be diagnosed as anything from mild adrenal fatigue to a full-blown thyroid problem like Hashimoto’s. Instead of peaking at 8 am, our cortisol levels peak later in the day. You may be one of these people. Think about it. When are you most energetic? Mid-morning? Mid-afternoon? Early evening?

For those of us whose cortisol levels peak later, we also tend to have elevated cortisol levels when we’re supposed to be going to bed. So while we may be physically tired at 10 pm, our brain just won’t shut down. So we either suffer from insomnia, or we assume we’re “night owls” who like to read books or watch movies well past midnight.

So, what happened with this study? 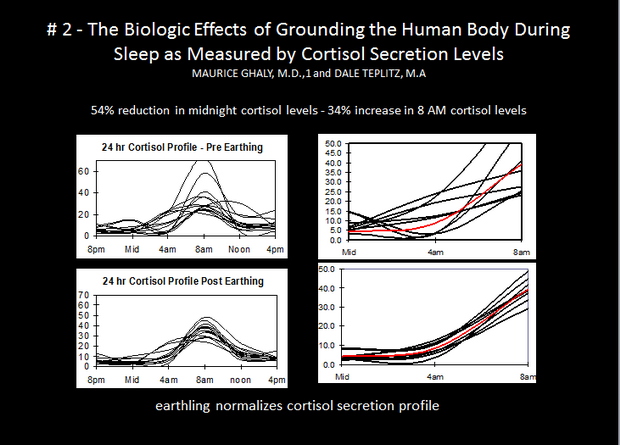 After grounding, their cortisol levels returned to a more normal, or “ideal” state.

No wonder they were sleeping better!

What does this mean for you?

If you are one of the many who suffers from adrenal fatigue or any kind of thyroid imbalance that keeps you up at night or feeling sluggish during the day, you may want to consider grounding yourself.

Okay, I’ll say it, despite how woo it sounds. You may want to practice earthing.

Clinton went on to create a variety of grounding sheets — sheets that are electrically conductive and plug into either the electrical ground in your outlet or the literal ground outside your window.

I’ve been sleeping on my earthing sheets for a couple of weeks now, and I already notice that my days are much more productive and it’s easier to sleep at night.

Why the “greatest health discovery”?

It doesn’t seem all that far-fetched, although there are no studies that have been done which really back up this claim.

So, maybe if you suffer from chronic inflammation of some kind — from arthritis to heart disease — you may want to self-experiment and see if you can experience relief through earthing.

I’ll admit that when I first saw the price of a grounding half-sheet, I inwardly flinched. Yet, my dad spends $100 per year on pillows that help him sleep better and prevent snoring. It’s not too far fetched to imagine him spending $169 on a sheet.

So, I did it. I’m self-experimenting. I’m sleeping on an earthing sheet that cost me $169 and should stay in sound quality through 100 wash cycles. Given that I only wash my sheets once every couple of weeks, that’s not a bad deal. That’s four years of grounding for just $169.

And yes, my own electrically-inclined husband measured me while I slept on the grounding sheet. I am, in fact, grounded! Fun, huh? I am earthing, while I sleep.

Maybe it will work for you!?!

Kristen Michaelis is a wife, mother, nutrition educator, author, and passionate advocate for real food. She is the author of Food Renegade, a wildly successful website discussing real food, ancestral nutrition, & sustainable agriculture. Living just outside of Austin, Texas, Kristen is blessed with three brilliant young children. She enjoys taking walks at dusk, curling up with a good book, getting foot massages, and playing in the rain. She also has an affection for Australian Shiraz wines. Kristen teaches two online courses in nutrition, speaks at conferences and other events, and chases her home-schooled children around the house. She also blogs. Endlessly. If you’re a lover of raw milk, pastured meats & dairy products, locally grown and organic vegetables, and slow food, please join her at the Food Renegade blog and check out her online classes. Check out the original article at Food Renegade, here.

Have any thoughts or questions about earthing? Comment below…