In Part I of this series, I reviewed the biology of Neu5gc (“Neu5gc, Red Meat, and Human Disease: Part I,” January 14, 2015). Now it’s time for Part II: a look at whether mammalian meats (beef, lamb, pork, dairy) may help provoke Hashimoto’s autoimmune hypothyroidism. 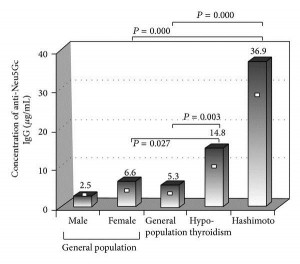 This is one paper in which it’s almost enough just to present the data. Here are levels of anti-Neu5Gc antibodies in patients with hypothyroidism vs healthy controls: 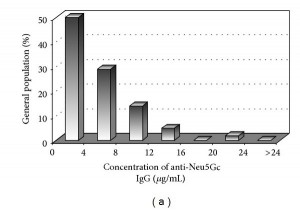 Here are antibody levels in the healthy population (Figure 2a): 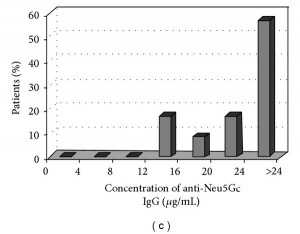 This is a very good separation of the two groups. It looks like if you can generate large numbers of anti-Neu5Gc antibodies, then you are almost certain to get Hashimoto’s hypothyroidism. 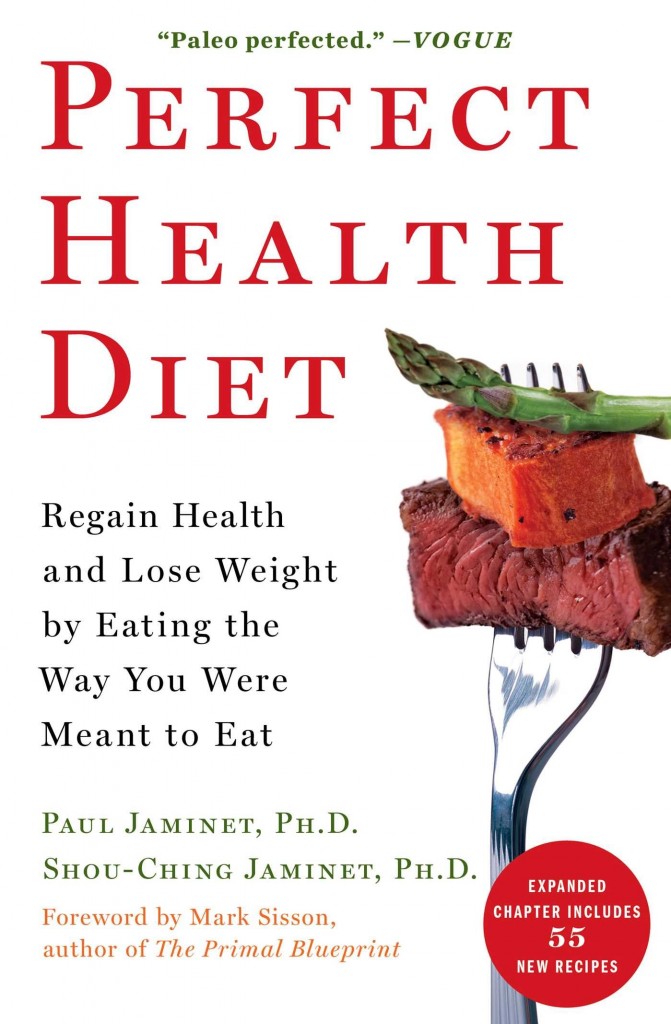 The study authors state, “this is the first study investigating the association of anti-Neu5Gc antibodies with autoimmune diseases such as hypothyroidism.” [4]

Their paper has not yet been cited by any other papers. It looks like the investigation of Neu5Gc-mediated autoimmunity is at its very beginnings.

Jim Beecham, MD, responded to my previous post with a personal story:

I read with interest your post about Neu5Gc. I am anxious to read Part 2 which I understand is coming. Meanwhile I have been doing a little research on the subject.

I suffered badly with childhood asthma, and I still get a sort of asthmatic tightness of my breathing once in a while. In the past few weeks have I realized this is on days after I eat cheese and/or beef. This has ceased upon my cutting out red meat and dairy this past week.

I also get hypothyroid symptoms of cold face and backs of hands from time to time. I wonder if this is also linked to Neu5Gc …

a day or so after eating too much cheese and red meat.

The paper linking Neu5Gc to hemolytic uremic syndrome is [6].

There’s an excellent chance that Hashimoto’s authoimmune hypothyroidism is brought about by a complex of factors:

If this is the case, then the strategy for overcoming Hashimoto’s autoimmune thyroiditis would involve:

Neu5Gc-mediated autoimmunity does not play a role in rheumatoid arthritis, but it may play a role in other autoimmune diseases. The most likely organ to be affected is the gut, which is directly exposed to food; endothelial cells, which line blood vessel walls, and immune cells which circulate in blood, as blood is the next location after the gut exposed to food molecules entering the body; and lastly organs which interact closely with the blood, such as the thyroid. Hemolytic uremic syndrome is a condition of endothelial cell dysfunction. 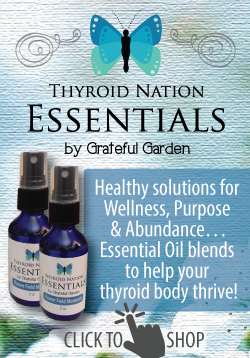 For those who want to understand mechanisms, here is the key background:

So Neu5gc has the potential to accumulate in human cells, especially intestinal cells which are directly exposed to food; and we can form antibodies to Neu5gc, which then may react to human cells which have incorporated Neu5gc into their carbohydrate coat.

One might think that this would be enough to generate autoimmunity, but more is needed. Although everyone has antibodies that can react to Neu5gc, the “preimmune repertoire” of antibodies binds to Neu5gc with very low affinity, and “low concentrations of anti-Neu5Gc antibodies do not seem to have any effect on Neu5Gc containing cells.” [4] In order to make high affinity antibodies, B cells must be repeatedly stimulated by Neu5gc-containing antigens.

The best stimulation is provided by bacterial cell wall components. As one paper states,

Bacteria are potent immunogens because they express a number of factors that can act as immune stimulants. Gram-negative bacteria universally produce endotoxins that have been shown to be powerful immune system modulators through the Toll-like receptor 4 (TLR4) on a variety of human immune cells. Lipoproteins on Gram-positive and Gram-negative cell surfaces can also interact with TLR2, resulting in release of cytokines involved in B cell and T cell proliferation. In addition, bacterial DNA has been known for many years to have the capability to stimulate the immune system. [2]

So to generate autoimmunity against Neu5gc incorporated in human cells, B cells must first be triggered to form high-affinity anti-Neu5gc antibodies by meeting bacterial pathogens who have incorporated Neu5gc into their cell walls.

This can happen because some bacteria do incorporate sialic acids from their local environment into their cell walls; and thus gut bacteria will incorporate Neu5Gc from food into cell walls.

A primary reason for doing this is that, by coating themselves in sialic acids acquired from their host, they look like a “host cell” and are shielded from immune attack. [5] Many pathogens have learned this trick:

Many pathogens secrete a sialidase that releases sialic acid from [nearby cells] … [O]ther sialic acid-utilizing bacteria, such as the respiratory pathogen H. influenzae, lack genes for a sialidase …. Presumably free sialic acid is made available to such pathogens by other, sialidase-expressing bacteria living in the same niche, or … by host sialidases that are activated in the course of inflammation. [3]

Among the pathogens known to use host sialic acids to shield themselves from human immunity is Neisseria gonorrhoeae, the pathogen that causes gonorrhea. It is possible that gonorrhea infection could lead to autoimmunity through this mechanism.

To date, the published research on this topic has focused on the possibility of pathogens incorporating Neu5Ac, the primary human sialic acid, from human cells into their cell walls, and subsequently triggering autoimmunity against Neu5Ac. There has been little study of the possibility that gut pathogens will incorporate Neu5Gc from food into their cell walls, potentially triggering autoimmunity against Neu5Gc incorporated in human cells.

Yet a recent study [4] comparing the levels of Neu5Gc antibodies in human blood against the prevalence of Hashimoto’s hypothyroidism suggests that this may be a significant pathway for autoimmunity. 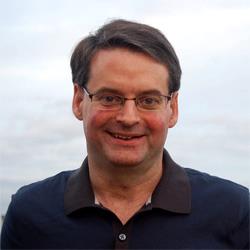 Paul Jaminet, Ph.D.  was an astrophysicist at the Harvard-Smithsonian Center for Astrophysics, became a software entrepreneur during the Internet boom, and now provides strategic advice to entrepreneurial companies while pursuing research in economics (see PaulJaminet.com for more information). Paul’s experience overcoming a chronic illness has been key to our views of aging and disease. Check out his website at PerfectHealthDiet.com, follow him on Facebook and Twitter.

Questions or anything to ask about autoimmune disease and red meat?  We want your thoughts in the comments section–Please!