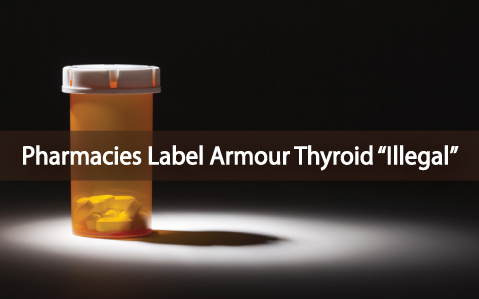 Dr. Pepper introduces us to a patient who was denied Armour and why.

Early in May 2014 a patient being treated with Armour Thyroid (desiccated thyroid) for hypothyroidism reported that her pharmacy service would not refill her prescription for Armour Thyroid because it was an “illegal” drug. We were both very distressed to learn of this, but for different reasons. My patient was rightfully concerned that she might be receiving a wildly inappropriate medication, while I was concerned that I might not be able to prescribe a medication I knew to be extremely helpful and safe.

The notion that Armour Thyroid is illegal turns out to be a misrepresentation, but this could easily be the start of a rumor adding a new stigma to the use of this drug. Medicare’s decision to remove Armour from the list of medications it will pay for was the likely trigger for these developments. The Federal action was based on recommendations by national organizations such as the American Association of Clinical Endocrinologists (AACE) 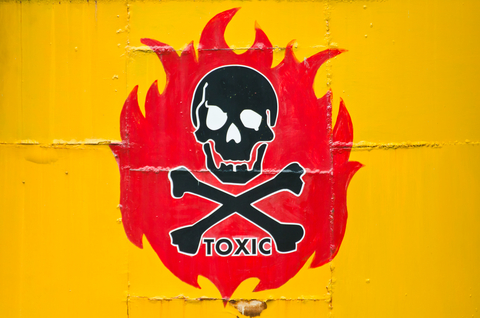 . According to the AACE guidelines published in 2012, recommendation 22.4 states;

This recommendation was approved unanimously by the AACE panel of experts.  (Can’t Be)!

Aside from the scorn being heaped on Armour Thyroid by the AACE, there is also a widely repeated rumor that Armour is dangerous to people older than 65 years because it contains the hormone T3 which theoretically may overstimulate the heart.

The result of these policies is that not only has Medicare removed Armour from its list of approved drugs but commercial pharmacy services have followed suit. When explaining these restrictions to Armour prescriptions the pharmacy service reverted to the word “illegal” when summing up the situation for my patient. So there you have the origins of the plausible new rumor that Armour is an illegal drug.

Another example of how the commercial pharmacy services are responding to Armour Thyroid, is this “Therapeutic Alert” I received from CVS/Caremark pharmacy in regards to another patient’s prescription, 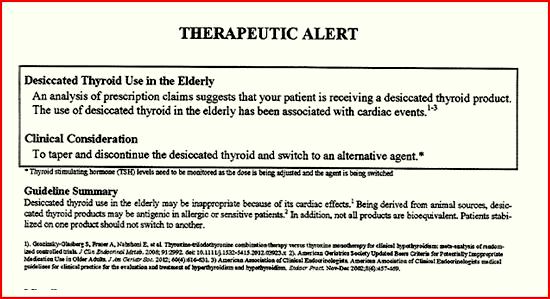 With all these agencies going to great lengths to eradicate Armour Thyroid as a reputable treatment for thyroid disease, one may wonder why I persist. The answer is after extensive experience and research I believe this drug to be extremely useful and safe for my patients and that these advisory agencies have failed to do their job in understanding the drug treatments they are responsible for.

The Therapeutic Alert I received, offers 3 references in tiny font at the bottom as the authority supporting their warning.

The AACE guideline statement has similar flaws. It is stated that there is no evidence to support using Armour in preference to T4 treatment. There is no logic to conclude because of a lack of preference (superior performance?) that a drug should not be used. If that were true, most of the medications on the market for treating hypertension or diabetes would be similarly blacklisted.

As of this date, editors of key medical journals including Endocrine Practice published by AACE, have refused to publish our data.

Based on these facts, I will have to disregard the Therapeutic Alert and AACE guidelines when appropriate as I hope to offer my patients the best possible therapy for their disease. I also hope my colleagues and I will not be stopped in these efforts but only public knowledge of this situation can protect prescribing doctors from censure.

If you would like to help, please email Dr. R. Mack Harrell, the new President of the AACE, VSkelly@aace.com, with the statement, “We respectfully demand better options for treatment of hypothyroidism. I support my doctor’s ability to prescribe Armour Thyroid. Repeal AACE recommendation 22.4. ”

(Dr. Pepper has no economic relationship with companies that produce or market Armour Thyroid)

**This article originally featured on Metabolism.com**

Dr. Gary Pepper, M.D., is Board Certified by the American Boards of Internal Medicine, and Endocrinology and Metabolism Gary Pepper, M.D., is a graduate of Tufts School of Medicine in Boston, Massachusetts and is a former Professor at some of the nation’s top institutions including New York University School of Medicine, New York Medical College, Albert Einstein School of Medicine and Downstate School of Medicine. He spent the first 15 years of his medical career conducting research and teaching  and then 15 years providing medical care in his private practice in South Florida. His focus now is on how to make the best use of the next 15 years of his career. Dr. Pepper says, “This is the Age of Misinformation.  We communicate so fast and with so many people that if we aren’t careful about what it is we’re saying, bad information can spread across the globe in a few days. There are those who try to profit by purposefully making up problems which they offer to solve for you at a price. Meanwhile the medical profession is contorted and distorted by doctors who live in fear of being sued and by teachers who get paid to promote commercial interests. My goal for the coming years is to use Metabolism.com as a platform to provide members with a clear and clean perspective on the health subjects that matter most in my field.  I have withdrawn from all financial arrangements with pharmaceutical companies and medical device makers to eliminate conflict of interest, even of the subconscious type. My role models are my 90 year old patients who have a sharp wit, active life style and are still living life to the fullest. You have to be very lucky to achieve that but luck favors those who are prepared.  During my career I developed a deep appreciation of how illness and injury can bring down even the toughest of souls. “ Dr. Pepper in his recently published book, Metabolism.com, combines the best of traditional and not-so-traditional medicine to show the best ways to achieve your health and wellness goals. He covers a wide range of subject from how to improve your metabolism to why it is so hard to find a doctor who can treat thyroid disease to why the FDA doesn’t want to approve a new weight loss medication.  So let Dr. Pepper guide you with unique insight and experience by having a look at Metabolism.com, follow him on Facebook, Twitter and Youtube.

Questions or anything to ask Dr. Pepper about Armour and the AACE? We want your thoughts in the comments section–Please!